What is a French Bulldog? 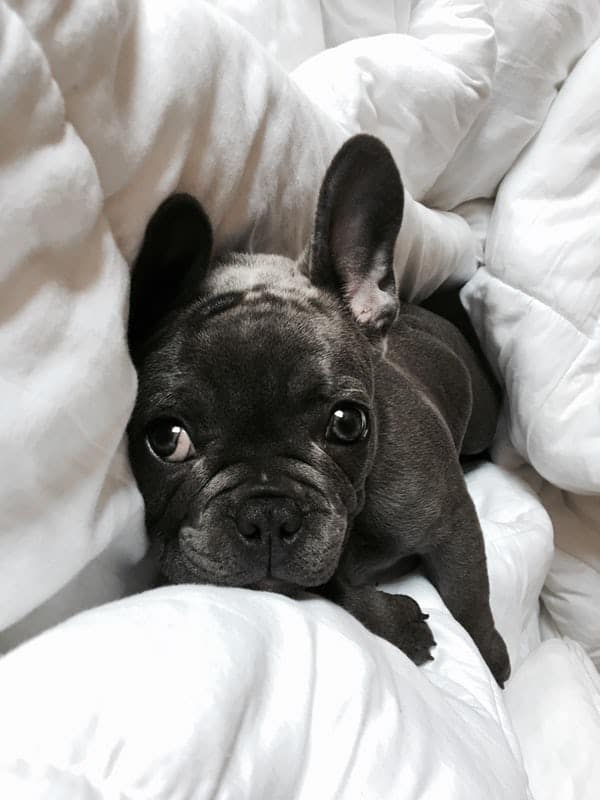 The French Bulldog is a small stocky compact dog with Bat like ears. A lively, intelligent and affectionate companion or lap dog. First bred in the 1800’s when Toy (dwarf) Bulldogs from England were interbred with Ratters in Paris, France. Some 50 years later the breed gained much popularity with French Nobility and the popularity spread worldwide, in 2015 it was ranked as the 3rd most popular breed in the UK and is also a firm favourite across the USA

Quick Facts about the French Bulldog

Lifespan of a French Bulldog

Wither Height of a French Bulldog

Weight of a French Bulldog

Average Price of a French Bulldog

Is the French Bulldog Hypoallergenic?

No, but they are not big shedders.

Temperament of the French Bulldog

The French Bulldog has a small squat body shape, with wide front legs to a square chest. They have a short thick neck running to a large square head, Short flat nose with broad hanging flews.

The most noticeable and charming feature of this dog is its Bat like ears which are usually erect and face forward giving what some describe as a clownish appearance.

The back described as a roach back which dips behind strong shoulders to then arch high and dip again toward the tail which is usually short and straight but a few have a slight screwed or twisted tail which is very short and points downward.

The hair is short but smooth to the touch.

History of the French Bulldog

Small Bulldogs were popular in 19th Century England and when English workers went to France for work in the mid 1800’s some took dwarf bulldogs with them. French breeders with cross breeding introduced them to the upper class of France as Bouledogue Francais and they became quite the wanted puppy because of their playful nature and small size.

Visitors from America were introduced to them and they were taken across the pond to the USA where an American Club was formed in 1898 sponsoring shows with the dogs that attracted the high society and wealthy Americans who fell in  love with the breed.

Moving on to the 21st Century and the breed has retained its favour in fact increasing enormously in the UK since around 2009. In 2016 a cute black French Bulldog named Mokaodc Robobull Catatumbo won Best of Breed at Crufts and the breed is now once again popular throughout France and has gained more fans within the USA.

Characteristics of the French Bulldog

This Lap Dog is affectionate, attentive and full of playful behaviour. They have a reasonably good energy level which makes them ideal family dogs but will also happily sit on your lap as a one man dog.

The only concern you may have when these dogs are being playful is that most of these dogs seem unable to swim so please be careful if you and the kids are playing near water.

They are reasonably easy to train at a basic level simply because they love to interact with their owners, they can occasionally be stubborn but are easily distracted if they appear to be sulking.

They can be a little nervous or wary of strangers but are unlikely to be aggressive, they are more likely to hide behind your skirts if they are uncertain.

General Health of a French Bulldog

Generally these dogs are fairly fit but there are some notable health problems that occur with this breed. Brachycephalic syndrome, Intervertebral disc disease, hip dysplasia, patellar luxation and some allergies.

A good hip and knee test by a vet will inform you of any disc hip and leg problems, some of these will be noticeable at the puppy stage such as patellar luxation, but some may simply come with age.

The Brachycephalic syndrome in these dogs is well known by vets and sometimes it simply causes them to snore, with any advanced stage of this condition the dog will need surgery because it can adversely affect their breathing but this is very much a routine operation now at many vets.

Whilst these dogs are easily placated with 2 or 3, 15-minute walks a day, they will also charge around the garden with the kids happily playing for half an hour before being exhausted.

What is important with this breed is to walk or exercise these dogs regularly, as in daily if you can. Regular daily walks may well eliminate any disc and hip problems often suffered at an older age due to lack of exercise.

How Much Food Should I Feed My Puppy?

The Lhasa Apso is a companion lap dog weighing around 6 to 7kgs and stands at just 23 to 28cm. They generally live for around 14 years and are a Pedigree breed recognised by all the major kennel clubs and placed in the Utility Group. The Lhasa Apso They are a wonderful companion thanks to…

Whilst many Terrier dogs find it difficult to acclimatise to family life the Manchester Terrier is a sensitive and devoted family dog. Despite that this dog was originally bred for ratting and rabbit hunting they have evolved into excellent dogs for children and adults alike, particularly those families that are active and enjoy tie outside….