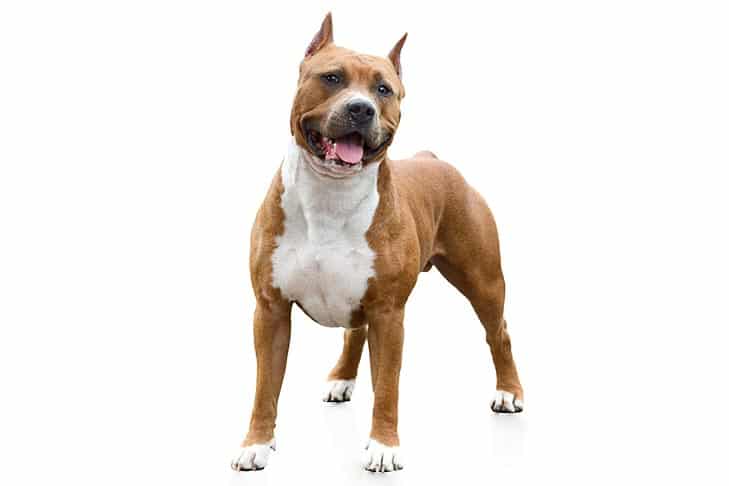 They have a deep broad skull with the typical pronounced Bull Terrier cheek muscles. Ears are set high facing forward half flopping slightly or erect depending upon their interest. Preferably NOT cropped.

They have a well defined jaw often with what appears to be a smile. The neck is heavily muscled tapering wider from the back of the head to the shoulders which are well muscled into medium length legs coming down from a broad deep chest. Feet are short with well spread toes.

The back slopes to a full waist with powerful hips and thighs to short back legs and a low set tapering tail of medium length.

History of the American Bull Terrier

Many varieties of Bull Terrier arrived in the America’s from the mid 1800’s. Originally referred to as the Staffordshire Terrier by the UKC and the AKC the name was chosen with the acceptance of its historical roots from Staffordshire, England.

Because there was a seemingly large number of Staffordshire type terriers including the Pit Bull it was decided in January of 1969 that to help distinguish the breed from its close relatives that it should be called the “American Staffordshire Terrier”.

Nicknamed the AmStaff by lovers of the breed they are keen to show that the breed has very different characteristics to the Pit Bull varieties.

Temperament of the AmStaff

Fans of this breed call themselves AmStaffers and they say that whilst these dogs are a strong muscular breed they are a soft loving animal, affectionate with human family members who love cuddling up on the couch or playing games in the yard.

Full of personality these dogs are highly trainable, loving the mental and physical challenges that such things such as agility training can require.

These are great family dogs but will also firmly attach themselves to just one person that will spend their time with them.

They are loveable but not ideal for the elderly seniors as they need to be able to expend energy on a daily basis.

Originating from China this small slender dog has two distinctive looks. The most commonly known is the Hairless variety which has spotted pink skin a spiky “crested” headpiece, with furry socks...

Mick and Jan who run this site have been rescuing animals such as dogs and chickens, to ponies and horses for several years.
Currently they have 3 rescue dogs. 1 Shih Tzu, 1 Cross Breed Terrier (both lapdogs) and a much larger cross between a Staffordshire and an American Bulldog.

They have built this site in an effort to inform people and help them make good choices about the care needed for all Dogs and in particular, Lap Dogs.

This site is owned and operated by Jan and Mick known as JanMick. JanMick associate and participate in affiliate and advertising programs designed to provide online sites a means to earn advertising fees by advertising and linking to Affiliate Partners. JanMick is therefore rightly compensated for referring online traffic and business to these companies, thus helping them to continue their rescue work.

This is such an
AWESOME GIFT IDEA

Upload a pic of your pet and have it put on the gift you want to give to your loved one.